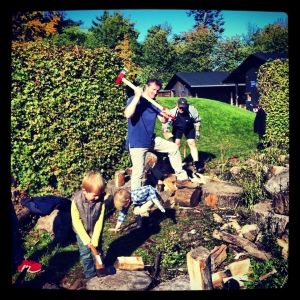 Charlie’s forest school held a cleaning up party yesterday.   Parents and children gathered to help chop wood, weed beds, clean the sandpit and generally tidy up.  Afterwards  we all cooked sausages we’d brought on the smokey, open fire.  We ate them with delicious salads and bread baked by the kindergarten chef.  Pudding was apple tarts using fruit from the forest school garden.  The staff very kindly did the washing up. 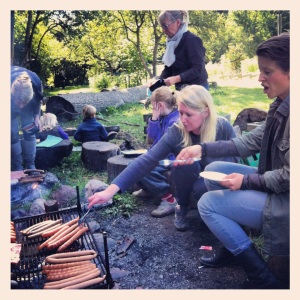 It was a good chance to chat with other parents and discover that many of them also wonder what age formal schooling should start.  Some almost envy the British system and would rather their kids began earlier than they currently do here (which is aged six).

But then I was emailed a news story yesterday claiming that social rather than academic skills are key to school readiness – that means more play.  Watching Charlie and all his buddies running around yesterday, there was no shortage of that.