I was kindly invited to a lunch yesterday by the British Ambassador to Denmark, Vivien Life.  (She’s standing in her garden in front of a Barbara Hepworth sculpture, which forms part of the UK Government’s art collection.)  It was in aid of the breast cancer charity, Pink Tribute, which was set up 10 years ago.  And of course it was to mark breast cancer awareness month.

There were some fascinating speakers including a woman who’s had cancer not once, but twice – ovarian and breast. Although she was very matter-of-fact about her ordeals, you could see the impact it’s had on both her and her family.  She wore a beautiful dress that had been specifically designed for her one breast – having undergone a mastectomy. 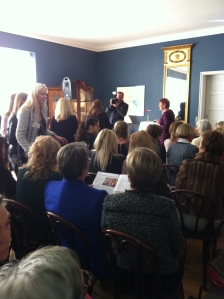 Another speaker was Henrik Flyger, head of breast cancer surgery at Herlev Hopsital.  He discussed a new radiotherapy ‘machine’ he can use in women with early breast cancer.  It targets the malignant area, immediately after the tumour has been removed.  I think the technique is called intra-operative radiotherapy.  Mr Flyger claims subsequent radiotherapy treatment that can last several weeks and have terrible side effects, is then unnecessary.

He said clinical trials show the technique has very positive results – including the prevention of mastectomies.  The research is due to be published in the medical journal The Lancet.

Many women in the room were asking why there was only one such ‘machine’ in Denmark.  At 5 million krone, or £565,000, cost is obviously a factor.  But the main reason, according to the surgeon, is opposition from within the Danish medical community.  He claims it comes down to a fear of job losses.

Now I don’t know the ins and outs of radiotherapy or oncology and I’m certainly no medical expert.  But it does seem a great pity if a scientific development to treat breast cancer is being hampered.  Surely those with the disease deserve the very best treatment available.  I think this is one issue the Pink Tribute charity will take up this year.