I’ve been wanting to write this blog for ages but wasn’t quite sure how to – for fear of appearing to be prudish.  Then my parents came to stay at the weekend and during a walk around the beach at Charlottenlund, they were taken aback by the number of people swimming – naked.  Without any fuss, both men and women were very casually stripping off to go skinny dipping.  It was 11am on Sunday morning.

I often find myself turning around when I realise there’s somebody in the nude swimming towards me.  It’s silly really – they couldn’t care less who sees them, so why should I?  And trying to change on the beach after a quick dip always results in an embarrassing muddle – mine.  The Danes, of course, don’t bat an eye lid.  They simply don’t have the same inhibitions most Britons or Americans have about being naked in public. 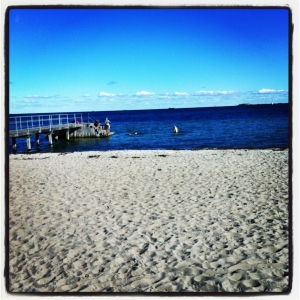 There’s no room for prudishness in public swimming pools either.  Take for example the preparations needed before you can even get into the pool.  In the ladies’ shower rooms there are strict rules on display demanding that everyone uses soap to wash themselves all over – swimwear has to be removed.  And you can forget about privacy – cubicles and curtains simply don’t exist.

They are also much more matter of fact about sex.  I was pretty taken aback when my three year old picked up an illustrated book at his kindergarten about the facts of life.  The front cover had a drawing of a naked man and woman in bed together. But when I handed it to a member of staff saying there must be some mistake, she was surprised at my reaction.  If a child here – even as young as three – asks questions about babies or even sex, they’re answered. 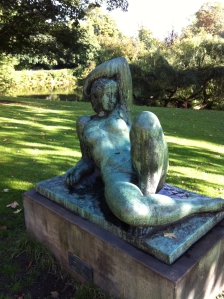 I shouldn’t be surprised.  There’s been a growing row here over what many Danes claim is censorship on Facebook.  One offending item was a photo of a female breast with the nipple clearly visible.  That, along with illustrations from a 1970’s sex education book, apparently violated Facebook’s nudity policy so they were removed.  Danes think it’s ridiculous as you can read in the Copenhagen Post.

Even on the high streets here there’s plenty of flesh on show.  There’s a full sized bus advert of a topless woman promoting a boob job, that’s currently doing the rounds.  But nobody seems to take any notice.  Except, that is, those of us who are used to a little more discretion when it comes to nudity in public.