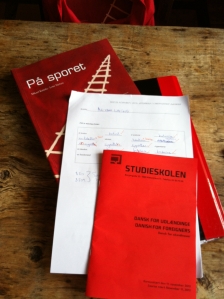 After six weeks of Danish lessons, I took my first test on Monday to see if I could move on to the next module.  I admit it wasn’t great, but I thought parts of my written paper were pretty good.  The teacher thought otherwise.  When we had our ‘chat’ on Wednesday evening, it began with Karin telling me with a sad look on her face: “Well the test didn’t go so well”.  Her advice?  That I had to start all over again.  In other words, I failed.

Although it doesn’t really matter, because I am voluntarily putting myself through this pain twice a week, with many more hours spent on homework, I was really disappointed.  I didn’t show it to the other (brilliant) students – who all seem to speak hundreds of other languages.  But inside I was mortified and felt completely humiliated.  I’m not used to failing.

Of course, I could easily give up altogether.  But as I am expecting Charlie, our three year old son, to start speaking Danish at his forest school, I have to keep going.  So despite the desire to quit, I have just signed up for a new class.  It begins next Tuesday – after a day’s work reporting for Al Jazeera.  I’m not looking forward to it.  But as the saying goes:  “If at first you don’t succeed, try, try again.”  I’m trying!