I was invited by the British Embassy in Denmark to take part in a social media conference today called “Digital Media for Diplomatic Excellence”.  Along with three of Denmark’s most prestigious journalists (Michael Lund from DR, Margit Shabanzadeh from TV2 and Mads Brandstrup from Børsen) we discussed the rise of Twitter.

While it’s big in the UK, in Denmark it’s relatively small.  Facebook is the preferred social network here, with more than three million Danish users.  But that’s changing.  Danish politicians are tweeting and so too are journalists.

British diplomats are also embracing Twitter and social media.  At today’s event we heard from the British Ambassadors for Lebanon and Romania (Tom Fletcher and Martin Harris).  They weren’t with us in person, but via ‘google hangout’ (which is a bit like Skype) we could see them, listen to them and even ask them questions.  Both of them tweet and blog regularly and do so very effectively. 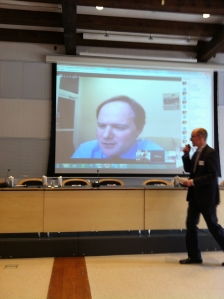 The British Foreign Office realises it has to engage with people and social media helps.  Martin Harris described Twitter as ‘people power’ and Tom Fletcher noted that if you’re not on it you won’t last.  Fletcher admitted that since the Edward Snowden revelations, people expect a higher level of transparency and more honesty on social media.

These men, along with others like the British Ambassador to Denmark, Vivien Life, are trying to be ‘Digital Diplomats’.  That can only be a good thing.