I am very concerned to hear that the only English-language newspaper in Denmark, The Copenhagen Post, may not survive.  A week before Christmas all staff had their contracts terminated.

I’m told that the owner, Ejvind Sandal, informed employees that if they could think of a way to fix the problems, then he might consider re-employing them in three months time.  So far the CEO, the Editor-in-Chief and the News Editor are among those who’ve quit.  They’re not saying much, but Justin Cremer, the News Editor, did tweet this a few days ago: 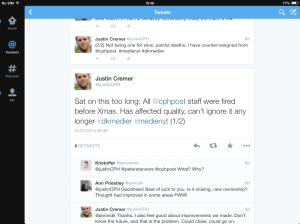 “Sat on this too long: All @cphpost staff were fired before Xmas. Has affected Quality, can’t ignore it any longer

His second tweet reads: “Not being one for slow, painful deaths, I have counter-resigned from @cphpost.

So what does it mean for the 400,000+ expats in Denmark who don’t speak or write Danish?  I, among others, rely on the Post to give me an idea of what’s going on here.  I’m not going to mince my words – if the Copenhagen Post closes and there’s nothing to replace it, then I think it will be a disaster.  Denmark is small and has to communicate with the outside world – including the non-Danes living inside its own borders.

As I know only too well, newspapers and regional TV news have struggled to survive in the UK.  Now I don’t know what the fundamental problems are at the Copenhagen Post.  But I hope the Danish government/Foreign Ministry realise just how important an English-language service is to Denmark.