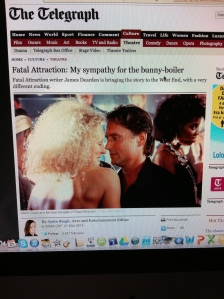 The Telegraph is covering Alex Forrest!

It’s something I’ve learned to live with, and at times it’s been pretty tough.  Sharing a name with a stalker, known as the ‘bunny-boiler’, hasn’t been easy.  I’ve been teased mercilessly for 27 years.

But most people appeared to have forgotten all about Glenn Close’s portrayal of Alex Forrest in the 1987 film Fatal Attraction.  Until, that was, the scriptwriter, James Dearden, decided to stage a new version.  It opens in London’s West End next week.

The good news is I think Alex Forrest might actually survive this time round.  The necessary ‘happy ending’ for the film’s US audience has apparently been ditched.  Glenn Close will be pleased. 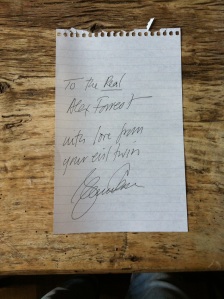 She of course isn’t playing Alex Forrest on the London stage, which is a shame.  I’ve never met her myself, but a few years ago a friend saw her in a restaurant and persuaded her to write me a note.  It’s something I’ll always treasure! 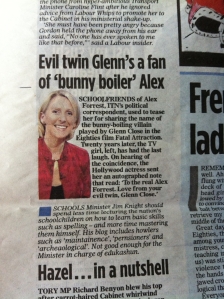