Ever since I turned 18, I have always voted in British elections.  This year, though, it’s proving much harder to cast my vote.

As I am currently living in Denmark I am classed as an Overseas Elector, along with millions of other British expats around the world. Back in January I decided to heed the advice from the British Foreign and Commonwealth Office and apply online to register. It was pretty straight forward. 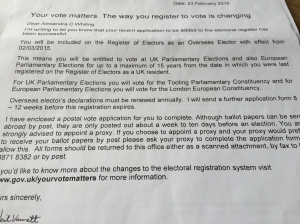 Letter from my local council in London

A few weeks later I received a letter from my borough council in London telling me that I had been successful. The electoral services department included a postal vote application – which is by far the easiest way in which to exercise my right. However, it came with this advice:

“Although ballot papers can be sent abroad by post, they are only posted out about a week to ten days before an election. You are strongly advised to appoint a proxy.”

A proxy? Someone I trust enough to put the ‘X’ next to the name/party to whom I’m giving my vote? Am I the only British citizen who finds this deeply uncomfortable? Where’s the ‘secret ballot’ in all this? Given the numerous investigations into postal election fraud in the UK, why is it considered ‘democratic’ to ask someone else to vote on my behalf?

I was hoping my parents would help me. But it turns out they’re out of the country on election day. So now I have to think of someone else who will exercise MY right on Thursday 7th May.

When I do convince someone to help, they then have the whole issue of how to cast MY vote. Either they do it in person in my South London constituency, or they can receive my ballot papers by post. If they choose the latter, there’s an application form he/she will have to fill in – one that I have to send them first, from Denmark.

The whole system seems crazy. With all this technology at our finger tips, why is it so damned hard to vote? Surely it’s time the Electoral Commission and the British political system in general moved into the 21st century.