Until I moved here, I didn’t fully appreciate the number of fantastic restaurants there are in Copenhagen. 15 in this capital have at least one michelin star. While I’ve been lucky enough to eat at the very best in the world – Noma – I may have now experienced somewhere that tops even this joint.

The Snowball – with candyfloss, watercress, squid, mint and cucumber

Kiin Kiin is nestled in the heart of Nørrebro and is the only Thai restaurant outside Thailand to be awarded a Michelin star. And boy is it deserved. From the moment we entered this former drug den, we were treated like royalty and fed like kings and queens. Of the 22 dishes we were served, it’s hard to know which was my favourite. The flavours, the textures, the look and smell – every single course was perfect.

The crispy cricket buried in a bucket of edible soil is chef, Henrik Yve Anderson’s equivalent of Noma’s ant dishes. As Kiin Kiin itself says: “Insects (including ants) are high in protein and very healthy… But so many serve ants these days.” This really was delicious. 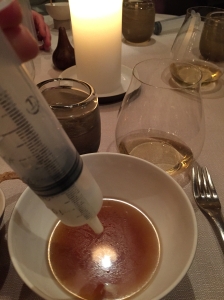 The liquid in the syringe turned into thick noodles!

Tuna worms in wasabi are also a talking point – and really tasty.  So too The Snowball – candyfloss with squid, mint, cucumber and watercress. There was salted meringue with cashew, lotus flowers, miang kam – a spiced salad with tamarin, chili, lime and ginger. Honestly the courses and the flavours just kept on coming.

At almost 1,000 DKK for food alone, this is a restaurant you need to save up for. But I really can’t recommend it highly enough. I hope I’ll get the chance to come back for a second sitting.