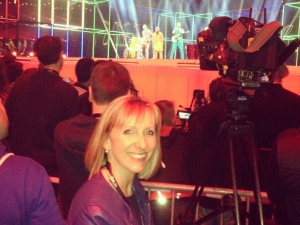 Apart from enjoying Bucks Fizz’s success a very, very long time ago, I can’t really say I’ve paid much attention to the Eurovision Song Contest.  That was until this year.  How, as a journalist, could I possibly ignore it when it’s being hosted right under my nose, here in Copenhagen?

So having finally got my press pass (see my struggle here), I’ve been a frequent visitor to Eurovision Island.  It’s really nothing to look at – in fact B&W Hallerne at Refshaleøen is an enormous old shipyard built slap bang in the middle of nowhere.  Getting there and back is not easy (it took 3 hours on public transport on Friday afternoon and 1.5 hours in the early hours of this morning).  But once inside, it’s great.

I’ve covered a number of big political events over the years from the G20 in London through to the annual party conferences.  So I was expecting a similar kind of press pack.  Not a bit of it.  The majority of media representatives at Eurovision are pretty much obsessed.  They know everything there is to know about Eurovision over the 58 years it’s been going – they can recite every lyric to every song; they dress to either look like their country or the performer they’re supporting; and they actually cheer and dance as each artist takes to the stage.  (Can you imagine the press doing this at a party conference?!)

So there I was, with my cameraman/editor, in an enormous press tent covering the first semi-finals for Al Jazeera English.  Our story was pretty serious – Russia and Ukraine battling it out, not just back home, but here on stage.  As it happened, both countries are now through to Saturday’s final, even if the Russian Tolmachevy twins were booed by the audience as their success was announced.

But imagine trying to edit the piece while the music roars and the press fans go crazy?  It wasn’t easy, but my editor was a true pro and we got it done.  And as a recent convert to Eurovision, I’d do it all again.  If only I had tickets to the Final!

(And if you’re interested, here’s the report I did for Al Jazeera, after both Russia and Ukraine qualified for the Finals.)